Waves on the Ocean 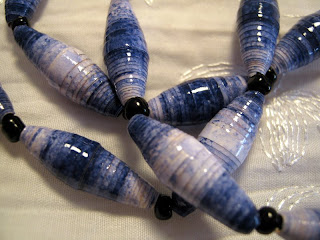 I love these blue and white beads I made--they make me think of ocean waves ebbing and waning. The idea actually came to me while watching a sunset, but with the colors I chose they ended up being more ocean-y than sunset-y. Maybe I'll make sunset beads another day.

I made these by starting with a blank white sheet of paper. I used blue acrylic paint and and artist's sponge for painting. I started at the top edge of the paper and sponge painted heavily, making a dark blue. As I moved down the paper, I used a lighter hand with the sponge so it the color gradually lightened. It was nearly white by the bottom edge.

I cut the paper into traditional, one-inch tapered triangles. Since that cutting method alternates which side of the paper is the base, half my triangles were dark blue on the wide side and light blue at the tip, while the other half were the other way around.

Melissa Burnett
I'm a writer, photographer and all around dreamer. I love to travel, whether that means taking a long trip or seeing the other side of town from a new perspective. I live in Texas with my husband, my son and a very large cat. 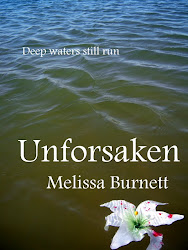 Lisi Reynolds doesn't believe in the supernatural, until she and her best friend encounter an evil presence in a client's house. Now Lisi must decide whether she's willing to risk her life and sanity in the battle for her friend's soul.

Buy the novel now on Kindle.